UACES 43rd Annual Conference takes place at the University of Leeds between 2-4 September 2013. In this post, Simon Usherwood (University of Surrey), reflects on the first plenary which  looked at  euroscepticism and its consequences for European integration. 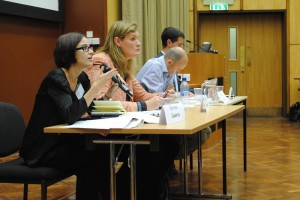 The first day of the UACES conference in Leeds was very instructive for me. On the back of our special issue of JCMS, the organisers let us have the opening plenary session to discuss the impact of euroscepticism on integration, and the outcome was considerable.

We invited Nikki Sinclaire to join us for the plenary. Nikki was elected to the EP in 2009 with UKIP, before leaving the party to set up her own: we thought it was important to get a practitioner’s perspective, and Nikki offered something that wasn’t the usual stereotype.

The outcome was (to quote one person), ‘marmite-y’: either you liked it or you didn’t. I had the impression that for a lot of people in the room, they had never heard a eurosceptic at first hand. Indeed, that was the intent – to get some communication going between the different sides in a debate too often characterized by assumption and condescension.

Most striking was the way the ideas raised in the plenary were repeated throughout the day.

The best example of this came during a panel on the mechanics of British withdrawal (headline finding: it’s very complicated). I found myself echoing a point made by Nikki (if less stridently), namely that even if difficult, if that’s what a referendum decided, then it would have to happen. The discussion went around this variously, but someone suggested that part of the issue that pro-EU actors face is a lack of imagination about what might happen. An analogy could be (and was) made with the collapse of colonial empires and of communism in Central and Eastern Europe.

The converse of this has been the surfeit of imagination demonstrated by some sceptics – the idea that ‘with one bound we can free’. This is the classic populist trope, that with just a dash of common sense and right thinking we can sort this all out.

Both positions – pro and anti – are dangerous, in their own ways and liable to becoming undermined and untenable. Yesterday’s discussions certainly didn’t solve that, but hopefully they helped to start getting people to think about how they are going to engage with it.