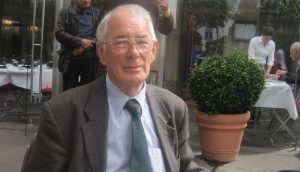 Source of photo: University of Kent

The breadth of Clive Church’s academic interests was extraordinary. In addition to his work on the EU, and his comprehensive 1990s report on the state of European Studies in the UK, Revolution and Red Tape was a pioneering study of French bureaucrats during the revolution, while his book on the revolutions of 1830 has remained a classic and led to his interest in Switzerland.  Despite his excellent activity in the field of political science, he always seemed to me to be the model of a good, old fashioned, solid historian: identifying, and navigating a clear path through, complex and diverse sources to provide clarity of exposition and explanation,  always eschewing jargon and high-flown abstraction.  This made him an excellent teacher, and a great collaborator: working on a shared module with him, whether at Kent or the Institut d’Etudes Politiques in Lille, was a delight. Continuity and Change in Contemporary Europe was one such module in written form.  His great personal kindness was hugely supportive.  Much was underpinned by his steady churchgoing: his skill in rapidly counting the audience at a lecture he attributed to many years counting congregations as a sidesperson at St Nicholas Church Thanington.

Clive Church was instrumental in my coming to the University of Kent. He had obtained funding for my post from Presence Switzerland, a Swiss government scheme supporting research and teaching on Switzerland. After my appointment, he was consistently supportive of my efforts to live up to Presence Switzerland’s expectations. This included co-founding the Centre for Swiss Politics (2003-2016).

Clive had followed in the footsteps of Christopher Hughes as the leading expert on Switzerland in the UK. He was thus a source of great learning and inspiration. With both of us being non-Swiss, our shared interest in, and affection for, Switzerland was that of external observers, looking at the country with an outsider’s eye. We both strove to understand Switzerland within a wider context, notably in relation to European integration, and shared a background in history.

These shared interests and perspectives led to a fruitful collaboration, including a jointly authored article seeking to draw lessons from Switzerland’s experience to shed light on the evolution of the EU, a chapter of mine on the impact of European integration on Swiss federalism for the Switzerland and the European Union volume that Clive edited, and a chapter by Clive on the influence of the Swiss experience on the Brexit debate in the UK for a book I co-edited.

The study of Switzerland and, more widely, of Europe, will be much the poorer without Clive.

Academic careers often owe much to the inspiration, opportunities and guidance provided by others. Mine owes so much to Clive Church, initially as an European Studies undergraduate enthused by his teaching on Switzerland and European integration, then as a PhD student benefitting from his patient encouragement and insightful comments during supervisions (occasionally held sharing his enjoyment at watching Kent playing cricket at the St. Lawrence Ground), and for almost twenty years as a co-author navigating the politics of successive rounds of EU treaty reform negotiations and delving into the technical detail of Maastricht, Nice and other EU treaties. Throughout more than thirty years of knowing and working with Clive, he was forever generous with his time, his commitment to joint endeavours and particularly his encouragement.

Clive’s knowledge and expertise as an historian and as a political scientist were extensive, particularly where Swiss history and politics were concerned. His commitment to detailed empirical research reflected his training as an historian; and his interest in both history and politics never waned. One minute we could be discussing the political implications of some obscure provision of the latest EU treaty, the next minute Clive would be recalling a recent visit to the archives in Bellinzona where he was conducting research on the history of Ticino. Clive’s dedication to scholarship and to the study of contemporary Europe was an inspiration and continued throughout his retirement. He was great a mentor, colleague, and friend, and he will be missed.