In February and March 2020, I had the opportunity to join the Institut Barcelona d’Estudis Internacionals (IBEI) as a NORTIA early career residency researcher from the University of Leuven. While embarking on my second year of PhD research, the objective of my stay at IBEI was to further develop my ideas in a stimulating academic environment that revolves around research topics similar or complementary to my own. My research revolves around three main areas of interest: developing a decentred perspective on EU foreign policy and international relations more broadly (together with Prof. Stephan Keukeleire); how international cooperation can be fostered amidst the crisis of the current global order, characterised by an increasing contestation of the norms on which traditional international relations have been based (in the context of the interdisciplinary CONNECTIVITY project at KU Leuven); and the role of non-state actors in the Middle East and North Africa (MENA).

These three research interests form the core of my PhD research. It starts from the observation that internal turmoil, regional conflict and external interventions have aggravated the erosion of state capacities in the MENA. At the same time, there is a proliferation of non-state actors fulfilling functions conventionally provided by states. These actors not only become increasingly important on a local level, but often operate transnationally and figure as prominent players in regional and international politics. Hence, policy recommendations to the European Union (EU) highlight the importance of factoring in these non-state actors in their foreign policy. Yet despite the EU’s efforts in shaping the region’s norms and practices regarding governance, statehood and regional interaction in view of its Southern Neighbourhood’s stability and resilience, it remains puzzling whether and how the EU deals (i.e. perceives, takes into account, engages) with these non-state actors as providers of governance into its foreign policy towards the MENA region.

IBEI constituted the perfect fit for me to help develop my project as there are several areas of convergence with my own research, including the interdisciplinary nature of the research conducted at the institute, its focus on norms in international relations, its expertise in the international relations of the MENA region and close affiliation with think tanks such as to the Barcelona Centre for International Affairs (CIDOB) and the European Institute of the Mediterranean (IEMed.). My residency mainly consisted of reading and writing my first single-authored academic paper, of joining several highly interesting seminars at IBEI, CIDOB and IEMed., of getting to know my new IBEI colleagues and their research, and of closer interaction with Prof. Elisabeth Johansson-Nogués, whose research on EU-MENA relations and the conceptualization of sovereignty in the MENA region in the context of the VISIONS (Visions and practices of geopolitics in the European Union and its neighbourhood) and EU-NORMCON (Normative contestation in Europe: Implications for the EU in a changing global order) projects.

Unfortunately, COVID-19 cut my stay in Barcelona short. From one day to the next, Spain introduced a state of emergency on March 14, as the virus raised the number of infections and deaths to the highest in Europe at the time. Universities closed and academic events became cancelled – including three workshops at IBEI, IEMed. and EU Online Academy, in which I would have presented my research. Soon after, country borders closed and air traffic became distorted. I remember being struck by the speed with which a certain “laughing it off” attitude towards the dangers of Corona changed into panicky familial concerns, food hoarding and empty streets. The first week of February, when I had just arrived, I noticed a small memorial at the Arc the Triomf for a Chinese physician and “for all the ordinary people who died of the coronavirus” (see picture). Back then, nobody imagined that a few weeks later Europe would become the epicentre of the pandemic… 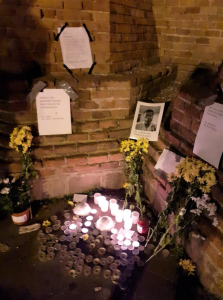 In consultation with my supervisor, University and family, I was able to take one of the last plains back to Belgium, which became more difficult and expensive than anticipated. A period of confusion and adaptation followed when I returned to a Belgium in lockdown. I terribly regretted not being able to finish my residency and the scheduled workshops. However, due to the wonders of technology and the help of Prof. Andrea Bianculli, I was able to organize an online meeting within the IBEI research cluster on Norms and Rules in International Politics two months after my departure. It was wonderful to see everyone again and to receive their kind feedback to my ongoing research and to the paper I wrote during my research stay. In addition, the NORTIA network and UACES started organizing online exchanges among senior and junior researchers, on the impact the pandemic has had, is having, and will have on ourselves and our research. These exchanges are hugely helpful for discussing changes and receiving advice, but also in terms of maintaining contact and sharing human uncertainties. 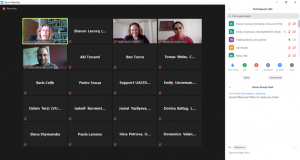 I am very grateful to NORTIA and UACES for making this residency possible for me, and particularly Prof. Robert Kissack and Prof. Elisabeth Johansson-Nogués for inviting me to their research institute. The residency has expanded my knowledge, my network and my circle of friends. I would hereby also like to thank my IBEI colleagues for sharing with me their current research in the many PhD meetings I attended and for giving me their thoughts on my ideas; but especially also for introducing me to Barcelona and Catalan culture, and for inviting me to many social gatherings like watching Barça matches, eating calçotada, enjoying music festivals, movie nights and apartment dances. Looking forward to staying in touch!