Funded by the UACES small event grant and a grant from the European Studies and the Jean Monnet Centre of Excellence at the University of Victoria, Canada 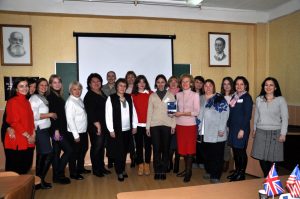 The aim of the workshop was to discuss, inform, and connect junior and well-established border and governance scholars from different regions and universities for future projects, facilitate field trips in Eastern Europe, and provide a collaborative venue for researchers to discuss their work in an interdisciplinary setting. The areas for discussion varied but covered all aspects of cross-border cooperation issues in the EU Eastern neighbourhood, examined cross-border policies and how they shaped local settings. Organizers welcomed scholars and students from interdisciplinary fields, including political science, history, sociology, public administration and language studies. The workshop gathered 62 participants from the US, New Zealand, Canada and Ukraine.

The Institute of Foreign Languages of the Bohdan Khmelnitsky National University of Cherkasy in Ukraine hosted a one-day international workshop “EU Cross-Border Cooperation Activities and Governance of its Eastern Neighbourhood”. On the day of the workshop, all participants were welcomed by Sergiy Kornovenko, Vice-Rector for Research and Innovations and Lyudmila Shvydka, Director of the Education and Research Institute of Foreign Languages at the Bohdan Khmelnytsky National University.
The welcoming speeches were followed by a key-note talk “Border Practices in the European Union. Perspectives from the European Experience” by Tatiana Shaban.

Participants also watched a brief video presentation on the “History of Borders” by Dr. Emmanuel Brunet-Jailly, the Jean Monnet Chair in Innovative Governance (2017-20) and the director of the Borders In Globalization research program (2013-20) at the University of Victoria, Canada. In this video, Dr. Brunet-Jailly discussed issues of how the history of states and their borders help us better understand the contemporary world. 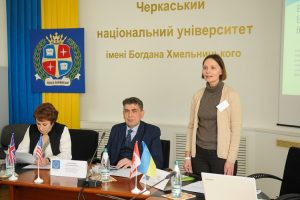 The workshop session consisted of three panels. The first one was entitled “Cross-Border Cooperation of the EU within the framework of the Eastern Neighbourhood Policy and the Eastern Partnership”, the second one dealt with borders in practice and covered everyday experiences on the EU-Ukrainian border and the third one explored “EU Governance role in Challenging Identities in the Post-Soviet Territories. Literary-historical approach to borders in Ukrainian culture”.
Panel one hosted a skype presentation by Natalia Chaban, professor at the University of Canterbury in New Zealand. In her presentation, she talked about the process of how to communicate Europe beyond its borders. Zhabotynska Svitlana, a professor from the University of Cherkasy, continued to discuss the important issue of perceptions. In her presentation “Ukraine in Perceptions and Images of Self and Others: A Cross-Border Cooperation Project” she suggested the (perception) framework for future cooperation projects with Ukrainian neighbours: Poland, Belarus and other Eastern and Central European countries. The last presenter, Swanson Signe, Fullbright Scholar from the Brown University New York, opened the discussion about post-Maidan energy sovereignty of Ukraine and influence of Russia-Ukraine gas disputes on Ukrainian path to European integration. These were highly topical presentations and the audience seemed to really appreciate them. Therefore, discussions between panellists and the audience continued beyond the session, during lunchtime. 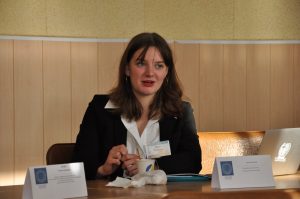 Two more panels were organised in the afternoon after participants had lunch. The second panel focused on a wide range of topics, including everyday experiences on the EU-Ukrainian border, teaching EU and its policies to students in Ukraine (Chaban Anatoliy, Professor, University of Cherkasy), language learning across borders (Shvydka Liudmyla, National University of Cherkasy) and discussing new prospects for the EU’s Eastern Partnership policy (Vasyl Moisiienko, Professor, University of Cherkasy). This section was absolutely engaging. Horobets Nataliia, professor, and Danylenko Anastasiia, a cadet (student) from Kharkiv National University of Internal Affairs talked about the integration of Ukraine into the European community, Ukraine’s local self-government, a fundamental renewal of public authorities and bringing them to international standards. In her presentation “Successes and Failures that the United Territorial Communities encountered in Sumy Region” Natalia Horobets listed the following problems: lack of a clear understanding of the community’s personal responsibility for community development; division of powers between local self-government bodies and executive authorities which is not regulated; no compliance with the requirements of the voluntary association; need for a fair format for distribution of budget resources; shortage of a qualified personnel; risk of corruption; and unresolved land issues. Finally, Chugai Oksana from the National Technical University of Ukraine, discussed teachers’ professional development through international experience. She presented MELTA Teacher Development Program for Teachers of English, an annual event which takes place in Munich, and provides opportunities for teachers of English from non-EU countries to attend workshops and master the art of innovative strategies of teaching the English language in a contemporary multicultural environment. 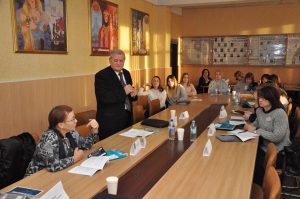 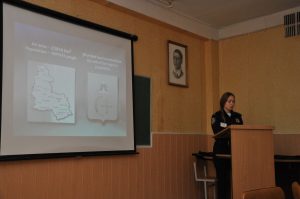 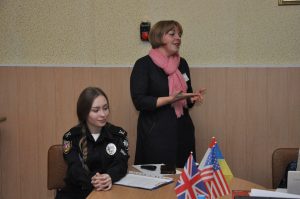 Panel 3 “EU Governance Role in Challenging Identities in the Post-Soviet Territories. Literary-Historical Approach to Borders in Ukrainian Culture” hosted Limborsky Ihor, Professor, from Shevchenko Institute of Literature of the National Academy of Sciences. He discussed cultural cross-boundary in Ukraine. Until today, the Ukrainians were not able to answer the question: whether they were going to completely abandon the Soviet past, or was it a space for a certain legacy there? He argued that Ukraine’s desire to constantly be aligned with European countries creates a situation where Ukraine was forced to feel its cultural dependence. Tetiana McGowan, Assistant Professor, University of Cherkasy.
Presentation “Paragon Names across Borders: Nomination Potential”. Presenter Sonia Geba, Fullbright Scholar at Brown University and an early career professional who worked in the non-profit sector as an advocate for immigrant youth in New York City public schools, discussed challenges border and border politics present to students. As an early career professional in the field of cross-border education, she was specifically interested in trans-territorial communities and their relationship with Soviet states. She spoke about American philanthropic aid to Hungarian refugees after the 1956 Hungarian Revolution and her work in the non-profit sector with immigrant students in New York City. Zaikovska Oksana from the University of Cherkasy closed the panel with her presentation on cross-border cooperation: constructing “Otherness”. 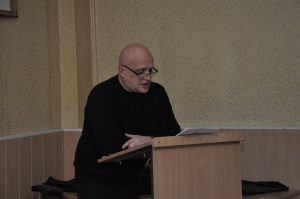 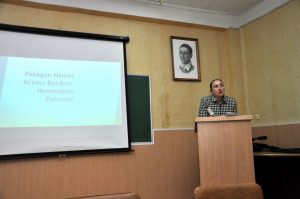 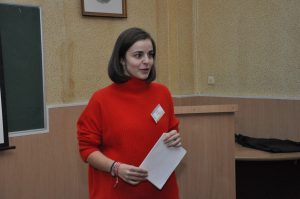 17.30-18.00: Final debriefing. During the final debriefing, Tatiana Shaban introduced Borders in Globalization (BIG Review) online journal:  to all participants and talked about how to submit a publication to the journal. Borders in Globalization Review provides a forum for academic and creative explorations of borders in the 21st century. It publishes scholarship (academic articles, essays, research notes, book reviews, and film reviews) as well as artwork (photography, painting, poetry, short stories, and more). The journal is committed to academic peer review, public access, policy relevance, and cultural significance.
As a result, this one-day workshop gave participants, including postgraduate students, an opportunity to present accomplished papers and research in progress to fellow researchers. 62 professors and students participated in the interdisciplinary event.
The organisers are grateful to the UACES (UK), Cherkasy University and the European Studies and the Jean Monnet Centre of Excellence at the University of Victoria, Canada for funding and hosting the workshop.