Brexit and the Voice of the People: But Which People?

Brexit has been debated and unpicked to exhaustion. Writing in February 2019, Brexit is beginning to feel like a bad soap opera whose scriptwriter has run out of ideas. The plot is going round in circles.

And yet, most discussions revert one way or another to sovereignty, migration and economy – all with clear nationalistic and imperialistic overtones. Debates about people or ‘the people’ seem to be at the core of these discussion, especially when it comes to migration. All such debates are implicitly or explicitly about ‘us’ and ‘them’. This binary(ies) need challenging. What is also needed is a recognition of the multiple further intersections and subgroups within these binaries of groups of people.

The term ‘people’ disguises radically different groups of individuals and their distinct interests, voices and degrees of power and security. There are people with enough legal security to remain in the UK should they wish to. There are others without, who may have to leave if/when Brexit materialises. There are those who may have to return to the UK despite preferring to reside elsewhere in the EU. 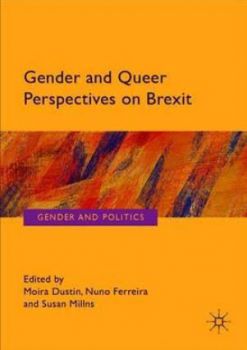 The simple step of starting to interrogate and break down the broad category of ‘people’ is greatly revealing. Undeniably, Brexit will impact very differently on different people, depending on characteristics such as socio-economic context, educational background, age, ethnicity, etc. An intersectional approach also highlights the key role gender and sexuality play in the impact of Brexit on a person.

To explore that possible impact, we have co-edited a collection – Gender and Queer Perspectives on Brexit – whose contributions unpack the various ways in which gender and sexuality may determine how Brexit will affect the lives of people in the UK and elsewhere in the Europe Union (and beyond).

Why a gender and queer perspective?

As we highlight in the introduction to this edited collection, women and gender and sexual minorities have been marginalised throughout history, including in political debates. With that starting point, we were keen to explore how Brexit can change the equality, human rights and social justice landscape in the UK from gender and queer viewpoints. Our collection’s conclusion – unsurprisingly – was that overall Brexit is very likely to impact negatively upon women and gender and sexual minorities in a variety of ways.

Even before the Brexit referendum took place, it was already clear that this was a strongly gendered process. As Achilleos-Sarll and Martill make clear, the campaign for Britain to leave the EU and the subsequent Brexit process have been dominated by discourses of toxic masculinity, linked to language associated with deal-making and militarism, and spearheaded by elite, white males.

This has had four potential (gendered) consequences: setting the UK on the path towards a ‘harder’ Brexit; the consolidation of free-market norms and retrenchment of social policies; the diversion of attention from domestic to international distributional consequences; and the persistent under-representation of women and minority groups in politics.

In the immediate aftermath of the referendum, it also became clear that black and minority ethnic (BME) women were going to be particularly targeted by racist and Islamophobic attacks and assaults, as Gill and Ahmed discuss. This underlines the complex implications of Brexit from the perspective of gender, race, religion and class relations.

This complexity is compounded by the potential implications of Brexit on work-life balance. This is an area in which the EU has not escaped criticism, but where it has also been instrumental in shaping an agenda and creating a policy and normative framework that has enhanced the position of carers and counterbalanced the UK’s neoliberal approach. Caracciolo di Torella argues not only that leaving the EU is likely to jeopardise any achievements in this area in the UK, but that the consequences of Brexit will also be felt by the EU, thus there will be no ‘winners’.

Yet another field of gendered impact of Brexit relates to the UK’s National Health Service (NHS), specifically the health, healthcare and social care available to people with disabilities and illnesses. In this regard, Dyi Huijg situates Brexit in a context of hostility against both disabled people and migrants, and points to the role that health management plays in migration control and the gender dimension of the roles of migrant carer and patients.

Also in relation to cross-border family law one can see the gendered impact of Brexit: Walker considers from a gender perspective the effect that Brexit will have on the relevant procedural rules, affecting areas such as child abduction, divorce, maintenance, domestic violence and parental responsibility. She concludes that post-Brexit there will be gaps in the law, especially in terms of enforcement of judicial orders and that there is currently no solution in these areas.

The situation, as Solanke alerts, seems to be even more dire in relation to Black British children, who may have a primary carer – most commonly a woman – without EU citizenship, and thus classify as ‘Zambrano children’ and lose access to their full rights as British and Union citizens after Brexit.

The gendered impact of Brexit is not, however, limited to women. As Iusmen argues, male unaccompanied minors may be particularly affected by Brexit, in the light of the risk that the UK will reduce children’s rights protections after leaving the EU.

Also in the field of asylum, Querton considers that leaving the EU is unlikely to immediately and significantly have an impact on decision-making in gender-related asylum claims. However, it will entail the loss of a legal framework underpinned by fundamental rights and effective remedies and may contribute to a(n even more) hostile environment towards women claiming asylum.

Lesbian, gay, bisexual, trans, intersex, queer and other (LGBTIQ+) individuals are also very likely to suffer in specific ways as a consequence of Brexit. Danisi, Dustin and Ferreira argue that Brexit will affect SOGI minorities on a range of levels, including likely serious effects in terms of human rights and equality policy, ‘soft law’ instruments, socio-cultural environment, economic resources, regional variations within the UK and civil society vibrancy. Alertness will be required to legal and policy developments that may detrimentally affect SOGI minorities: on the one hand, in the UK, when the EU will stop working as an external ‘standards setting’ actor; on the other hand, in the EU, when the UK will stop supporting the advancement of the EU’s equality agenda.

Dunne also acknowledges how the EU – both symbolically and practically – has helped to re-shape queer intersections with law in this jurisdiction. Nonetheless, he argues that, for many reasons (political and legal), Brexit is unlikely to fundamentally alter existing rights and entitlements.

Devolution has played a considerable role in Brexit debates, and has its own gendered dimension. Weldon-Johns critically examines whether there is, or could be, a distinctly Scottish perspective in the context of work-family rights post-Brexit, particularly from a gender perspective. The conclusion is that the current legal frameworks do not enable Scotland to retain continuity with EU law.

Still in relation to Scotland, Ritch explores how the independence referendum saw the establishment of new women’s organisations and networks to counteract a seeming marginalisation of women’s concerns in the official campaigns, whilst the European referendum saw limited national public engagement by women’s and other civil society organisations, and lacked a particular gender focus even in feminist spaces.

Yet, Scottish feminist policy organisations can continue to engage post-Brexit with pan-European feminist structures like the European Women’s Lobby, to campaign for relevant instruments such as the Istanbul Convention. In relation to Ireland, Galligan outlines the gendered constitutional and policy challenges of Brexit for Northern Ireland, the Republic of Ireland, and the UK-Ireland relationship. The upshot: Brexit necessarily destabilises the hard-won gains of the peace process and will have negative consequences for political and diplomatic relationships across and between the two jurisdictions, with an inevitable impact on women.

Clearly, the greatest impact of Brexit will be internal, but that cannot erase the impact that will be felt outside the UK as well. Barrow, for example, asserts that important policy developments in the EU’s defence and security policy from a gender perspective are at risk and concludes that, whether the UK and the EU negotiate a ‘hard’ or ‘soft’ Brexit, the integration of a gender perspective in defence and security policymaking may be undermined.

Stephenson and Fontana, instead, assess the gendered impacts of the possible trade agreements that the UK will enter into post-Brexit. They focus on the implications of trade agreements for employment, for consumption and for the provision of public services.

A key model referred to throughout the Brexit debates has been Norway. Holst, Skjeie and Teigen discuss the EU influences on four core gender equality policy themes (anti-discrimination law, work-life balance, gender mainstreaming, and gender quotas for corporate boards), concluding that Norway’s affiliation status has been relevant to policy development in this area in Norway. This debunks the idea that Norway’s status leaves it immune from EU’s influence.

Anything to look forward to?

The contributors to the Gender and Queer Perspectives on Brexit collection have offered careful and nuanced analyses to several gendered and queer dimensions of the Brexit debates. There are plenty of causes for pessimism, even if the UK has always, in many respects, had ‘one foot in and one foot out’ of the EU. What the debates on Brexit have brought to light in an acute manner is that women’s and LGBTIQ+ legal and policy conquests are precarious.

Yet, even where Brexit threatens the legal, economic or social gains of women and LGBTIQ+ people, there is a strong sense of resistance and positivity about the potential for addressing some of these risks if only they are identified and publicly recognised. Moreover, this collection makes it clear that leaving the EU will not only affect women and LGBTIQ+ in the UK, but should also be a priority for feminists and LGBTQI+ campaigners across Europe.

Outside the EU, the UK will no longer influence EU law and policy to any significant extent, and this may have negative outcomes for women and LGBTIQ+ people living around the EU, if the concerns of our contributors materialise.

There is still much more to do to fully understand the gender and queer dimensions of Brexit. In particular,regional, urban-rural and socio-economic differences across the UK need addressing through a gendered or queer lens. Only a more comprehensive intersectional approach can do justice to the lived experiences of all those affected by Brexit. In the process, it is essential to highlight all relevant threats. Only then will we be able to address them, not simply with the defensive demand for no regression on rights, but also the inclusive aspiration for an expanding, rather than narrowing, of horizons.

Sussex European Institute at the University of Sussex, Brighton, UK

Please note that this article represents the views of the author(s) and not those of the UACES.

Shortlink for this article: http://bit.ly/2I2MydQ 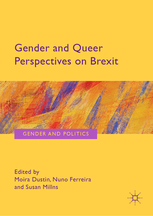 Gender and Queer Perspectives on Brexit (Palgrave 2019) is available here.