Scholars and practitioners assembled at the University of Maastricht on the 19th and 20th April 2018 for the third (and final) scheduled workshop under the auspices of the UACES CRN on European Energy. This particular workshop was specifically focused on further developing a collected volume and provided some lively discussion around the central theme of ‘diffuse and contested authority’ in the field of EU Energy policy. As with previous gatherings of this CRN’s members, this proved to be another dynamic, stimulating and enjoyable ‘meeting of minds’.

The workshop was kicked off by one the co-convenors, Anna Herranz-Surralles (University of Maastricht) who presented a jointly written paper (co-written with Jenny Fairbrass, University of East Anglia, and Israel Solorio, UNAM, Mexico), entitled ‘Diffuse authority and contestation in the EU Energy Transition’. This paper set out the key, central, organising concepts for the workshop and the collection of papers that were to follow.

Then, on the first afternoon, three papers were presented. The first paper was given by Mile Misic, entitled ‘Delegation and Accountability in Energy Governance in Multilevel Systems’ (co-authored by Jale Tosun, Nicole Schmidt and Mile Misic (University of Heidelberg).  The second dealt with ‘Contested Energy Transition? Europeanization and Authority Turns in EU Renewable Energy Policy’ (by Helge Jörgens (ISCTE – Instituto Universitário de Lisboa) and Israel Solorio (UNAM)) and was presented by Israel Solorio. The final paper of the day was called ‘Contested and Diffuse: How Energy Efficiency Policies became a Pillar of the Energy Union’, which was written and presented by Claire Dupont (from the University of Ghent). 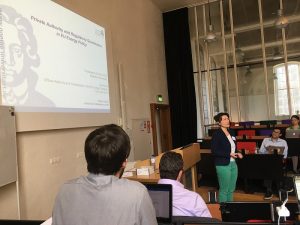 The morning of the second day began with a paper entitled ‘The Embedded Intergovernmentalism of EU Energy Policy Integration’, jointly authored and presented by Pierre Bocquillon (University of East Anglia) and Tomas Maltby (King’s College London). The second paper of the morning was given by Sandra Eckert from the Goethe University, Frankfurt (co-authored with by Burkard Eberlein, York University, Toronto) with the title of ‘Private Authority and Regulatory Governance in EU Energy Policy’.

In the afternoon, Andreas Goldthau (from the Royal Holloway University, London) presented a paper, co-authored with Nick Sitter (Central European University and BI Norwegian Business School), entitled ‘Private Authority and Regulatory Governance in EU Energy Policy’. The final paper of the day and the workshop was given by Anke Schmidt-Felzmann (Foreign Policy Research Institute, Philadelphia) on the subject of the ‘Nord Stream and the Energy Union: EU Competences squeezed between Russian Geo-strategy, Local Business Deals and Competing State Interests’.

The workshop closed on Friday afternoon with discussions about the next steps for the group and the collective publication that is planned. 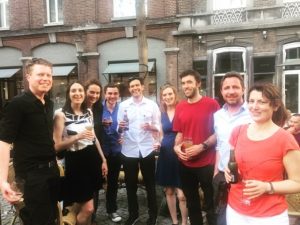 The co-convenors, Anna, Israel and Jenny give their heartfelt thanks to all of the paper-givers, the Chairs and the Discussants as well as the three sponsors (UACES, University of Maastricht and Universiteitsfonds Limburg SWOL) that made this international workshop possible. We look forward to further spirited discussions at the UACES Conference in Bath in September where several of these papers are due to be presented again.

A Forgotten Episode of the British Left: British Eurocommunism between Gramsci’s Mythization and Thatcherism | The Role of Europe in Global Challenges: Climate Change and Sustainable Development | Whither UK Higher Education Post-Brexit? Metaphors of Movement and Routes to the Future of Universities | Willie Paterson at 80 | Obituary: Professor Clive H. Church |