Over the past two decades preferential and free trade agreements (FTAs) have proliferated around the globe. FTAs differ in the level of liberalization they commit to, and the scope of economic sectors brought into the agreement.  Asian FTAs tend to be ‘shallow’, that is, they reinforce commitments already taken at the WTO and lower tariffs on a few products.  By contrast, EU and USA FTAs, incorporate ‘deep’ trade issues (elimination of behind the border obstacles to trade in the form of regulations, harmonizing competition policy, liberalizing trade in services, opening public procurement to foreigners, and tightening intellectual property rights). Both the EU and USA seek to establish themselves as norm-setters in their FTAs, given that developing states’ opposition to ‘deep’ trade at the WTO led to the decision at the 2005 Hong Kong WTO Ministerial Meeting to drop these controversial matters from the negotiation agenda and concentrate on trade facilitation.

Evident in both approaches to FTAs are political motivations of maintaining and extending their preferred regulatory system and gradually defeating opposition to this; long-term economic objectives of securing advantages to certain economic sectors from more open markets; and markets adapted to their standards and regulations.

The degree of similarity between EU and USA agreements is due to various factors: 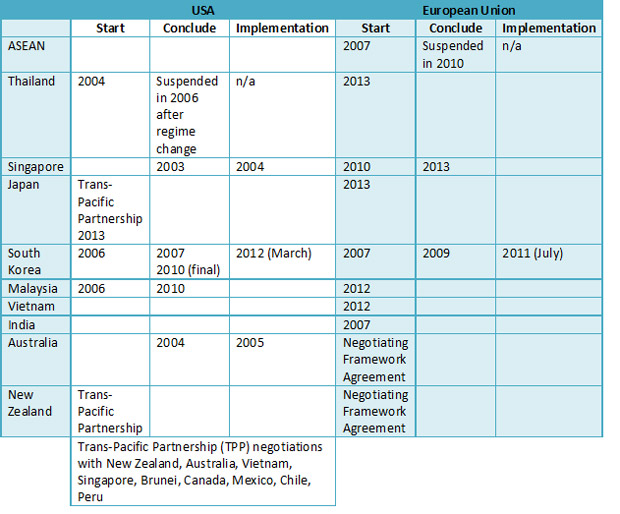 Differences in the EU and USA FTAs in Asia are determined by their domestic settings and policy priorities. USA chapters on service liberalization include audiovisual services, which the EU rejects to ensure cultural diversity. EU FTAs, like the recently signed FTA with Singapore, liberalize trade in green technology equipment and environmental services, sectors in which European firms are highly competitive. The USA approach to standard divergence tends to seek mutual recognition solutions, as it did by negotiating a high quota for USA cars to enter Korea using USA safety standards. By contrast, the EU aims at the acceptance of international standards that it uses (UN Economic Committee for Europe car safety standards) and the institutionalization of procedures for joint standard setting as it does in the FTA with Korea. Until the FTA with Singapore, EU FTAs lacked an investment protection chapter, as the European Commission was only vested with competences over investment negotiations in the Lisbon Treaty.

Intellectual Property rights (IPR), in particular the protection of Geographic Indicators (GIs), which denote products associated with a specific location (e.g. Champagne, Parma ham), is an area where the different regulatory approaches in the EU and USA have obfuscated attempts to create an international system at the WTO. The EU’s GI register grants automatic protection for GIs. In the USA, GIs are protected through trademarks, and it is possible to register a trademark with a GI which is not connected to the location. In its FTA with Korea the EU persuaded Korea to accept a reduced list of 100 EU GIs to be granted automatic protection. In the case of Singapore, however, a novel solution was reached. Singapore created new IPR legislation in the early 2000s, based on USA IPRs, including GI trademarks, which would be compatible with the high IPR protection that the USA-Singapore FTA demanded. Singapore has agreed to create its own GI register system to which EU GI holders must submit requests for registration and protection, rather than grant automatic protection to a list of GIs, which would infringe its domestic IPR laws. Although the EU insists this is not a precedent, it could point to a possible solution to EU-USA regulatory divergence, which is the stated aim of Transatlantic Trade and Investment Partnership (TTIP) negotiations.

What else can recent agreements with Asia reveal about the complexities of the TTIP and the potential for exportability of regulatory solutions in European and American agreements in Asia to the TTIP? The differences in EU and USA FTAs represent those issues which decades of EU-USA cooperation have failed to resolve and the most challenging issues for TTIP. Despite the political will behind TTIP, this will represent a more symmetrical negotiation in terms of the parties than any FTA negotiation, where it will be impossible for each of the parties to impose their models and solutions. This will lead to a re-design of their past practices, with a focus on joint regulation in future areas.

EU & ROK (2010) Framework Agreement Between the European Union and its Member States, on the One Part, and the Republic of Korea, on the Other Part http://eeas.europa.eu/korea_south/index_en.htm

USA (2011) Free Trade Agreement between the United States and the Republic of Korea http://www.ustr.gov/sites/default/files/uploads/agreements/fta/korus/asset_upload_file755_12697.pdf

This article arose from Maria’s presentation at a UACES Arena seminar which took place in Brussels on 4 December 2013. There were 42 attendees at the event and the audience included representatives from EU Institutions, think tanks and pressure groups.

The next deadline for applications is Wednesday 12 February 2013.