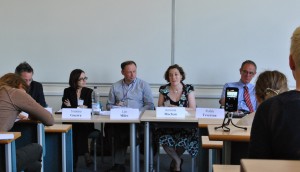 Students from across Europe gathered in Loughborough on 8-9 July for the 14th Annual Student Forum conference.  In this post Kathryn Simpson, University of Kent, reports on the last session of the conference, a roundtable on ‘Britain and the EU’.  A report from the first day of the conference can be found here.

With Loughborough continuing to be bathed in glorious sunshine, delegates once again ‘marched on the Schofield building’ at Loughborough University to take part in Day Two of the UACES Student Conference which would see in depth panel discussion on topics such as Human Rights, democracy, the rule of law, policy-making in the EU, EU trade polices and EU cohesion policy.

However, perhaps the highlight of the day was the roundtable discussion on “Britain and the EU”. Since accession in 1973, Britain’s relationship with the EU has been a contested topic and has come to the fore more recently with the promise of a referendum on EU membership in 2017 by the Conservative Party (if there is a Conservative majority elected in the general election of 2015), PM Cameron’s refusal to sign the Fiscal Treaty, and the rise in support for the Eurosceptic political party, the UK Independence Party (UKIP).

Therefore, perhaps now, more than ever, is the time to discuss Britain’s relationship with the EU.

Lord Teverson argued that the EU is “not à la carte” and that Britain is already somewhat semi-detached from the EU with no involvement in areas such as the European Defense Agency (EDA), the Eurozone and Schengen. Antonia Mochan reiterated Lord Teverson’s perspective by stating that the media, the British political & legal system and a lack of interest about the EU, all contribute to the rhetoric of a ‘better deal for us’ in the EU and that this needs to stop. Dr Simona Guerra built upon this and discussed the issue of Euroscepticism stating that Euroscepticism emerges when the EU project is in fact more contested and perhaps that is why we see the EU being discussed in Britain. Gergely Polner argued that Britain’s relationship with the EU was less Eurosceptic and less pragmatic than he previously believed and stated that the European Parliament elections in 2014 would offer a new insight into British/EU relations especially given changes under the Lisbon Treaty. With such a fruitful roundtable discussion a lively questions and answers session followed from an engaged and enthusiastic audience and thus concluded this year’s annual UACES Student Forum conference.

Listen to an audio recording of the roundtable:

This blog has been published as part of the Evolving Europe project which is funded with support from the European Commission. The views expressed are those of the author, and the Commission and UACES cannot be held responsible for any use which may be made of the information contained therein.