Even amongst those well-versed in the history of European integration, the name of Richard Coudenhove-Kalergi (RCK for short here and in the book) is relatively unknown.  This is particularly true in the anglosphere where until now there was no biography in English of this remarkable 20th century figure.  Martyn Bond would have already done a considerable service by producing such a biography but in fact, the book offers much more and can be read with equal profit by specialists as well as the general reader. 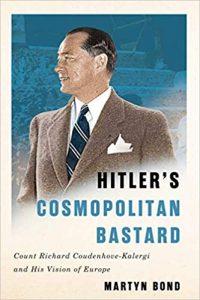 RCK’s life was full of incident from the moment of his birth in Japan, the son of an Austro-Hungarian diplomat and a Japanese geisha, in 1894 until his death in 1972 very shortly before the accession of the UK to the European Economic Community.  He developed the skills of a supremely able multilingual networker who was on first name terms with many of the Presidents, Prime Ministers and Foreign Ministers in Europe and further afield.  He was relentless in organising conferences and finding any other opportunity to get the chance to persuade such leaders of the virtue of his vision of the future of Europe, whether it was Mussolini, Stresemann or Briand before the Second World War or Truman, Churchill or De Gaulle after it.  It was a kind of back-handed compliment that Hitler referred to him as a “cosmopolitan bastard” and ensured that his works were among those proscribed and burnt.  Worse could have befallen RCK and his wife after the Anschluss when they were pursued by the Gestapo from Vienna but managed to escape by a roundabout route to Switzerland thanks to an escort provided by Mussolini through Italy!

His vision of Europe was set out in Pan-Europa, published in 1923, which soon became a best seller across the continent, running to several editions.  In the book RCK laid out his geopolitical ideas of a united European continent able to stand up to or alongside the other major powers in the world.  On the basis of the book and with the help of his Austrian wife, a famous actress of the day, he set up the Pan-Europa Union with individual branches across Europe whose members gathered for regular conferences, the first in Vienna in 1926, bringing together 2000 delegates from Europe’s political and cultural elite.  His ideas offered a view of the future that proved attractive to many, especially those not tempted by either the Communist example of the Soviet Union or the rising tide of fascism.

The book reminds us that such ideas are not some remnant of a bygone era but are relevant to those concerned about the development of the European Union today.  This is well-illustrated by the tension that existed between RCK and Jean Monnet, whose Memoirs famously make no mention of his contemporary, even though they moved in similar circles.  Whereas Monnet believed in the importance of supranational institutions as a way of moving European integration forward but insisted that this could only be done gradually, through small steps, RCK was not interested in institutional details but looked to the bigger picture and grand gestures, designed to set up a federation or confederation.  He backed De Gaulle’s Fouchet Plan in 1962 because he saw it as a way of improving Europe’s profile on the world stage and was not bothered by the fact that it implied setting aside the views of smaller countries and side-lining the Commission.  For him it was the goal not the method that counted, an argument that continues to rage within the EU.  Is it enough that the largest countries, in particular France and Germany, agree on a new initiative such as the European Recovery Fund or does the EU need to ensure that other voices are heard, even if the result is much slower, sub-optimal progress?  As the EU enters ever more areas that are sensitive for national politicians, the tension inherent in the argument between RCK and Monnet becomes even more visible than it was in their era.

The book points to another critical issue for those concerned with the process of European integration, namely the extent to which it should be a top-down affair or rather bottom-up.  With the EU starting up the Conference on the Future of Europe, it is an article of faith that European leaders must listen to what their citizens say about the next steps to be taken. It cannot be decided from the top and handed to a grateful citizenry.  We live in an era that sees Citizens’ Assemblies as a way of both articulating and aggregating opinion.   RCK took a very different approach.  For him it was central that European leaders commit to a unified Continent and that they promote it by developing a common currency, a single flag, an anthem, all ideas that he had put forward in his book and which he saw as creating a world of European patriots, committed to a wider community than simply their own national world.  His aim was to make this idea more attractive than the alternatives that were on offer, particularly before the Second World War.  As we  know, he failed but the question remains as to whether his more directive approach is more likely to be successful in the longer-term than attempts that seek to reconcile competing interests in a more consensual manner.  We cannot escape the dilemma that RCK identified and still have to make a choice.

Last but not least, RCK was very exercised by the question of the boundary of Europe and in particular, the position of the UK.  In his 1923 book he considered Britain to be an ally but outside the unified Europe but his opinion fluctuated throughout his life.  He spent much time with Churchill trying to persuade him that Britain should be part of the European experiment and Churchill repaid the compliment by citing RCK by name in his famous speech in Zurich in 1946.   RCK was confronted by much elite opinion in the UK that considered him to be a hopeless idealist who did not understand Britain’s very different trajectory and above all, the significance of the British Empire.  It has a very familiar feel in the present day when the idea of “Global Britain” is held up as a formula that offers a separate path from that offered by the EU.

This biography is then much more than an account of the life of RCK. It provides an insight into the first arguments about the nature of European integration that followed the Great War, arguments which continue to resonate today.  So don’t hesitate to read this book.