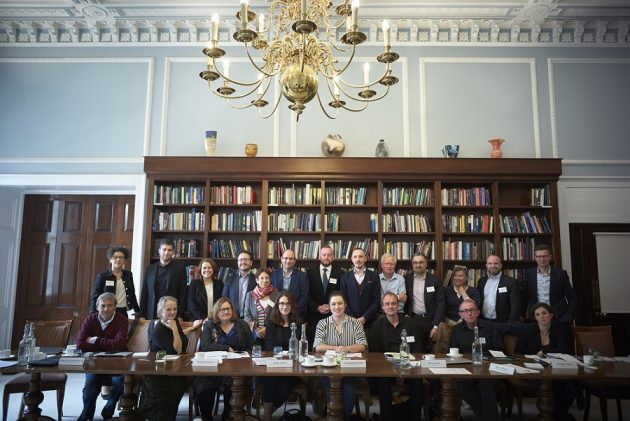 EUrope is changing, and in addition to critically asking why and how EUrope is changing, we need to investigate what epistemic and methodological advances can be made to better understand changes and challenges in EUropean identities, memories, borders, spaces and values.

In late 2017, Russell Foster of King’s College London and Jan Grzymski of Lazarski University, secured a special edition of the journal Global Discourse. Entitled “The Limits of EUrope”, this special edition was planned to draw together researchers from different disciplinary backgrounds, different career stages, and different normative imaginations of EUrope, to offer a forum for genuinely diverse research.

This approach was a great success. The special edition draws together leading scholars of European studies, from senior professors to early-career researchers, to approach EUrope from an interdisciplinary perspective which better provides a holistic approach to the contemporary state of EUrope. The editors also sought to use the journal as a means of overcoming a growing gulf between different research backgrounds and contrasting views.

In an innovative format, each academic article in the journal receives a shorter written response from a non-academic specialist. Drawing upon specialists in policymaking, civic society, journalism, and commerce and industry, these “Practitioners’ Responses” open dialogue between academic and non-academic experts, offering a variety of perspectives and approaches to issues in contemporary EUrope.

Furthermore, in an effort to help bridge a growing gulf between Europhiles and Eurosceptics, who are becoming increasingly polarised, the journal includes critical contributions from a variety of opinions on the nature of EUrope, and its normative role in society. 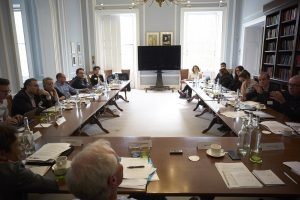 The London conference was held in the Reading Room of Carlton House Terrace – the former residence of George IV, situated in the heart of Westminster. It brought together the special edition’s participants; academic and non-academic alike. Over two days, each academic paper was presented by its author in a dedicated, chaired panel. The invited non-academic expert then gave their verbal response to the paper, illustrating points of agreement and contention as well as suggestions from relevant policymaking, legal, and industrial perspectives, before opening to group discussion by all contributors.

The special edition of Global Discourse (9:1), with all papers and responses, will be published by Bristol University Press online in January 2019, and in print shortly thereafter. 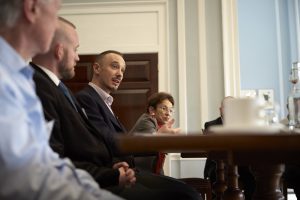 The editors and contributors are most grateful for the generous financial support of King’s College London, Lazarski University Warsaw, a UACES Small Event Grant, the Leverhulme Trust, and the Polish Association of European Studies. 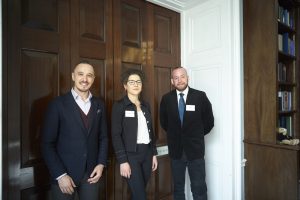 Russell Foster has a background in multiple disciplines which informs his approach to European and International Studies. His PhD, funded by the ESRC, approached the EU as the continuation of a historical theory of empire; a discourse which is manifest in the EU’s cartography and iconography. During the PhD he was ESRC Visiting Scholar at Virginia Tech, USA. From 2015-2016 Russell was Marie Sklodowska-Curie International Fellow in the Department of European Studies, University of Amsterdam and he commenced at KCL as a Leverhulme Fellow in May 2016. 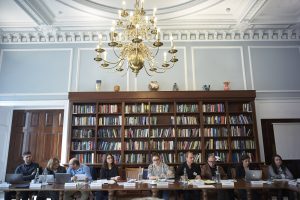 John Mills is an entrepreneur and economist who has long been involved with political matters. He is Chairman of John Mills Limited (JML) which specialised is selling high volume consumer products using audio-visual methods of promoting their sale. His main interests as an economist are the relatively poor performance of western economies compared with those in the East and the UK’ relationship with the EU. John was for many years a senior elected member of Camden Council and he is founder of Labour Leave.

Associate Professor and the former Dean of Faculty of Economics and Management at Lazarski University. She has an expertise in macromodelling with special focus on modelling instabilities and measuring policy effectiveness. She was consulting macroeconomic aspects of the Free Trade Agreements implementation in Poland for the European Commission Representation in Poland. She was also a senior researcher in the National Bank of Poland.

Federico Ottavio Reho works as Strategic Coordinator and Research Officer at the Wilfried Martens Centre for European Studies (WMCES), the official think tank and political foundation of the European People’s Party in Brussels. Before joining the WMCES in April 2015, he worked in the EU Institutions and Fora Division of the European Central Bank. He also worked as a trainee for a Member of the European Parliament, as well as in the political section of the US Diplomatic Mission to Italy. 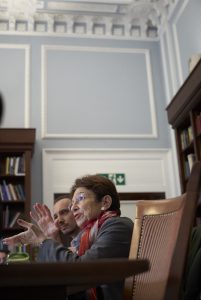 Ruth Wodak is Emeritus Distinguished Professor and Chair in Discourse Studies at Lancaster University and Professor in Linguistics at the University of Vienna. Her research is mainly located in Discourse Studies and in Critical Discourse Analysis. She is member of the editorial board of a range of linguistic journals, co-editor of Discourse and Society, Critical Discourse Studies, and of the Journal of Language and Politics. She was the founding editor (together with Paul Chilton) of the book series Discourse Approaches to Politics, Society and Culture. She was also section editor of “Language and Politics” for the Second Edition of the Elsevier Encyclopaedia of Language and Linguistics.

Heather Grabbe, as both the director of the Open Society European Policy Institute and director of EU affairs, works to ensure that open society values are at the heart of EU policies and actions, both inside and outside its borders. Her academic career includes teaching at the London School of Economics, and research at Oxford and Birmingham universities, the Royal Institute for International Affairs (Chatham House, London), and the European University Institute (Florence). Grabbe has a PhD from Birmingham University and a BA and MA from Oxford University.

Tobias Schumacher is Chair of European Neighborhood Policy at the College of Europe, Natolin campus (Warsaw). His research interests focus on the European Neighborhood Policy, on European-Mediterranean relations, on the politics of the Middle East and North Africa and the South Caucasus, respectively. He received his doctorate in political science from the University of Mainz, and is a Senior Research Fellow at the Center for International Studies at the University Institute of Lisbon.

Gerard Delanty is an interdisciplinary sociologist with an interest in social theory and the cultural and historical analysis of social and political questions. He has written eleven books, many of which have been translated into several languages, and edited seven. He’s also published over 100 papers on various issues in social and political theory, European identities, globalization, nationalism and the cultural and historical sociology of modernity. He is the Editor in Chief of the European Journal of Social Theory. 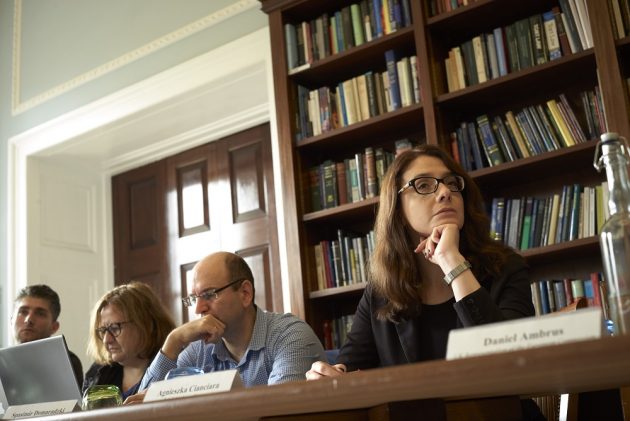 Roger Casale is a civil rights activist and the founder of New Europeans. In 2017 he won the Financial Times Future of Europe Award for his proposal for a Green Card for Europe. From 1997-2005 he was the Labour MP for Wimbledon, including three years as a Parliamentary Private Secretary in the Foreign Office (2002-2005).

Peter Vermeersch is a writer and scholar in the social sciences, Professor affiliated with LINES (Leuven Institute for International and European Studies) at the Faculty of Social Sciences of the University of Leuven, Belgium. In 2007 and 2008, he was a visiting scholar at the ​Minda de Gunzburg Center for European Studies, Harvard University. My research focuses on minority politics, nationalism in East Central Europe and the Balkans, democratization, and, most recently, restorative justice.

Martí Grau i Segú is member of the House of European History Academic Project Team. He undertook graduate studies in International Relations at SAIS-Johns Hopkins University Bologna and UPF, before working at the European Institute for the Mediterranean, and teaching at the UAB (2002-2003). He served as Member of the European Parliament in 2008-2009. He is currently part of the Committee of Experts of the EU-PHORIA project (Memorial d’Alsace, Schirmeck, France), and the Scientific Committee of the European Observatory of Memories.

Adrian Favell is Chair in Sociology and Social Theory at the University of Leeds and chercheur associé of the Centre for European Studies at Sciences Po, Paris. He is also a Professorial Academic Associate of the Sainsbury Institute for the Study of Japanese Arts and Cultures and serves as an associate editor of Journal of Ethnic and Migration Studies and on the editorial committee of Journal of Common Market Studies. 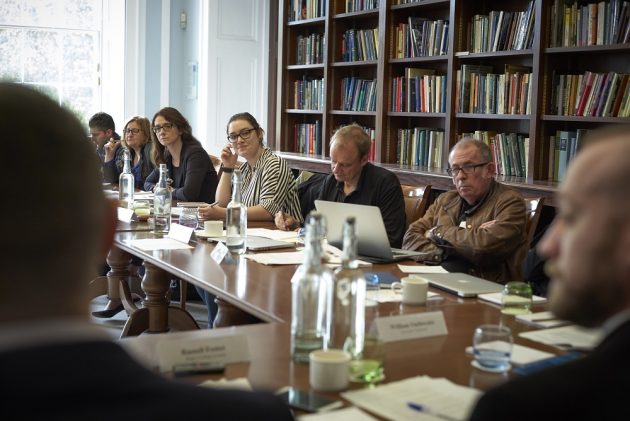 Omar Khan is the Director of Runnymede Director. Prior to this he was Runnymede’s Head of Policy and led the financial inclusion programme. Omar is the author of Financial Inclusion and Ethnicity; Caring and Earning Among Low-income Caribbean, Pakistani and Somali People; Who Pays to Access Cash?; Why Do Assets Matter?; A Sense of Place; and The Costs of ‘Returning’ Home.

Alex Callinicos is a political theorist and activist. In an academic capacity, he serves as Professor of European Studies at King’s College London. An adherent of Trotskyism, he is a member of the Central Committee of the Socialist Workers Party (SWP) and serves as its International Secretary. He is also editor of International Socialism, the SWP’s theoretical journal, and has published a number of books.

Spasimir Domaradzki is the head of the Department of Government Studies and a lecturer of international relations at the Lazarski University in Warsaw, Poland. Spasimir Domaradzki earned his MA and PhD at the Faculty of International Relations at the Jagiellonian University in Krakow, Poland. Domaradzki has published a number of scholarly articles on the contemporary notion of human rights, American foreign policy, Polish foreign policy, and historical policy in international relations. He was a Wilbur Fellow at the Russell Kirk Center and a fellow at the Dialogue Europe Center for Excellence of the St. Kliment Ohridski at Sofia University in Bulgaria.

Krassen Stanchev is a professor in Public Choice and Macroeconomic Analysis of Politics at Sofia University in Bulgaria, where he also teaches the history of economics at the postgraduate level. He is also CEO of KC 2 Ltd. and board chairman, founder, and former executive director of IME, Bulgaria’s first independent, free-market think tank. He is a former member and committee chairman of Bulgaria’s Constitutional Assembly (1990-1991), and a principal drafter of reforms leading Bulgaria from central planning to a market economy.

Martina Tazzioli is Lecturer in Geography at Swansea University and Visiting Lecturer in Forced Migration at City University of London. She is the author of Spaces of Governmentality: Autonomous Migration and the Arab Uprisings (2014), co-author with Glenda Garelli of Tunisia as a Revolutionized Space of Migration (2016), and co-editor of Foucault and the History of Our Present (2015). She is co-founder of the journal Materialifoucaultian.

William Walters is a Professor at Carleton University, with a cross-appointment in the Department of Political Science and the Department of Sociology/Anthropology. He has published widely in the areas of citizenship studies, the political sociology of states and international government, the geopolitics of borders and migration, and minor theories of political power and contestation.His work has been translated into French, Italian, German, Polish and Finnish.

Director of the Institute of Race Relations and head of its European Research Programme. She has worked at the IRR since 1982. She writes and speaks extensively on aspects of contemporary racism and fascism, refugee rights, EU counter-radicalisation and anti-terrorism policies and Islamophobia across Europe.  Liz was part of the CARF Collective, and an expert witness at the Basso Permanent People’s Tribunal on asylum and the World Tribunal on Iraq. She is currently an associate of the International State Crime Initiative at Queen Mary University of London, and the Border Crossing Observatory at Monash University, Australia.

with the financial support of