On June 22nd the members of the Security & Governance research group at the University of Hertfordshire welcomed scholars working on ecological issues in Political Science, Political Theory and Law for a day of presentations and discussions on how environmental resources, environmental changes and our understanding of nature and the environment as such impact on the governmental challenges which the European Union and national governments within Europe are facing. Political research is increasingly turning to issues surrounding the political urgency of ecological questions in the geological age of the Anthropocene, where humans have become the dominant geological force shaping the conditions of life on earth and the earth itself. However, analyses and debates remain mostly confined to their particular research fields. The ‘Governance beyond the Anthropocene’ workshop was designed to bridge those disciplinary boundaries. It stipulated at times challenging, but always productive debates which brought out tensions and points of contact and connection between different perspectives on what governing in and after the Anthropozoic turn implies. 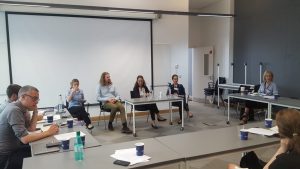 After a short welcome by the Dean of the School of Humanities, Jeremy Ridgman, as well as Hannah Richter in her function as the Chair of the Security & Governance research group, Dr Francesca Batzella (University of Hertfordshire) started the workshop with her presentation ‘Secure, affordable and sustainable? The European Union and the energy trilemma’ in which she outlined findings on the role of sustainability for the EU’s energy policy from her recent fieldwork in Brussels. Dr Hannes Hansen-Magnusson (Cardiff University) then continued our first panel on Contemporary European Environmental Politics with his paper on ‘Arctic Governance and the Anthropocene – the Politics of Responsibility’ which was a perfect example for the kind of interdisciplinary conversation we had envisioned for the event. Dr Hansen-Magnusson used a theoretical framework of mapping, sensing and hacking developed by Prof David Chandler, one of the other workshop participants, to understand multilateral European governance in the Arctic.

The second panel of the day, Geopower, Climate Change and Ecological Political Theory, examined the purchase of theoretical investigations into ecology and the Anthropocene for the critique and practical implementation of political governance.  Prof Phil Hammond (London South Bank University) developed an important critical account of the simulatory quality of ecological discourses, especially with regard to their visual representation, in his presentation ‘Climate Change and Post-Political Communication’. Prof David Chandler (University of Westminster) then continued the critical analysis of Anthropozoic governance with his provocative talk ‘The Anthropocene Dilemma: Governing for or against Climate Change’. He suggested that the Anthropocene does not provide lessons for, but in fact rather stands in contrast to any attempt of planned, regulatory governance. Dr Benoît Dillet (University of Bath) then concluded the panel with a more optimistic account of the creative power of nature, which could bring about and inform a different kind of ecological politics, in his talk on ‘Geopower, nature and government’. 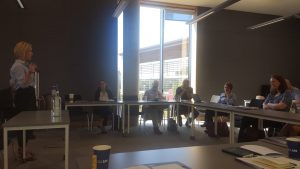 The third panel of the workshop then brought together research working on European and International Law to analyse and discuss Environmental Regulations: European Cases and Challenges. The panel was kicked off by Dr Emanuela Orlando (University of Sussex) who presented findings from her research on challenges and possibilities for the EU’s legal regulation of environmental crime in her paper ‘European Union and legal responses to environmental harms’. In the second paper, ‘Planetary and other ecological boundaries in EU law’, Prof David Langlet (Stockholm University) unpacked how different understandings of boundaries shape the way possibilities for ecological regulation are conceptualised within EU law. Finally, Dr Virginie Barral (University of Hertfordshire) argued that International Law, in contrast to European Law, contains scope for regulatory flexibility and open-ended development which is particularly suitable for tackling ecological issues.

In the final panel, Environmental Governance beyond the Anthropocene, the presenters reflected on how ecological challenges impacted on and changed how political regulation for different communities can be thought and put into practice. Dr John Mccormack (University of Hertfordshire) unpacked the challenges involved in planning infrastructure for sustainable communities in his talk ‘Sustainability and Citizenship: Sociological indicators for a change in direction’. Dr Alice Hague (James Hutton Institute, Aberdeen), presenting on ‘Ecological issues and community engagement’, discussed the role of ecological issues in faith communities. Finally, Dr Elisa Randazzo and Hannah Richter explored the political purchase of the turn to the Anthropocene itself, and argued in favour of maintaining tensions and friction between different theoretical and political perspectives rather than analytically flattening them in their paper ‘The Politics of the Anthropocene: Temporality, Ecology, Indigeneity’.

The organisers would first and foremost like to thank all speakers for their engaging and innovative approaches to ecological governance within a European context which they shared at the workshop, as well as for their positive feedback on the event. We would also like to thank UACES, the School of Humanities and the Law School at the University of Hertfordshire for their generous financial support which made this research workshop possible. A special issue which collates the workshop papers and captures some of the productive interdisciplinary dialogue from the event is currently being developed. Beyond this, we are looking forward to all exchanges and collaborations to grow out of the networks formed at the workshop.

Report by Hannah Richter, Lecturer in Politics and IR, University of Hertfordshire