The symposium discussed the challenges posed by Brexit twenty years after the signing of the Good Friday Agreement, at a time when EU involvement in the Peace Process and cross-border relations in Ireland are at the centre of public debate. 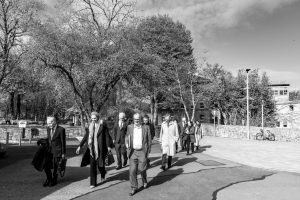 This unique and innovative event was organised by the Conflict, Humanitarianism and Security Research Cluster of the Whitaker Institute, National University of Ireland Galway, in partnership with the University Association for Contemporary European Studies (UACES), the Moore Institute and supported by the Irish Department for Foreign Affairs and Trade (DFAT).

During his career in the Department of Foreign Affairs, among other posts, he served as Permanent Representative of Ireland to the UN 1980-1983, Ambassador to the UK 1983-1987 and Secretary General of the Department of Foreign Affairs 1987-1995. He also represented Ireland on the official-level working groups that drafted the EU Treaties of Amsterdam,1996-1997, and Nice in 2001.

Dr Noel Dorr’s opening remarks started by recognising the importance and the perfect timing of this conference. The island of Ireland has now reached a crossroads. The UK has chosen a difficult path in Brexit, which raises serious questions for Irish people. The symposium, by looking back at what the EU has done in relation to the peace process and by looking forward to the considerable problems Brexit has generated, helps in the difficult task of thinking about on the future. The peace process in the island of Ireland has meshed very well and worked very well with the European Union, the larger peace process on the European continent. If Brexit takes the kind of unfortunate course that it appears it will take— even if it depends, of course, on how it will be worked out— Irish and Northern Irish people will need to develop some other mechanisms for nurturing natural good relations, the natural friendly exchanges between North and South, but also between these two islands.

1. Reflecting on the European Union and the peace process 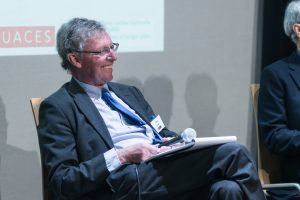 For decades, the conflict in Northern Ireland has been viewed in a relatively narrow context that has tended to marginalise the European dimension. The objective of this section was to understand how the EU provided significant practical and political support over the years, most notably through the on-going provision of funding for reconciliation and conflict transformation initiatives under the PEACE programmes.

Hugh Logue (former EU Commission official from 1984. In 1994 he, along with two colleagues, was asked by President Jacques Delors to consult all parties in Northern Ireland. Their recommendations became the blueprint for the first EU PEACE Programme)

Jane Morrice (former head of the EU Commission Office Northern Ireland. She was involved in the implementation of the Good Friday Agreement and was a member of the Standing Orders Committee which set the initial rules governing Assembly procedures post-devolution)

3. Afternoon Session: Brexit and the future of peace in Northern Ireland: policy perspectives and academia

The aim of the afternoon’s discussions was to interconnect politics and academia. We often have the academic perspective on politics, but rarely see the opposite. Therefore Dr Katy Hayward, Dr Mary C. Murphy, Dr Brendan Flynn and Dr Giada Lagana each gave a 10 min paper on an aspect of Brexit on the basis of their expertise. The policy-makers discussed the papers, to give their thoughts on the present political situation of the island of Ireland on the basis of their expertise and experience in the past.

Reflections touched on three main areas: the Brexit process thus far and its negotiations. Secondly discussions focused on the implications of Brexit for Northern Ireland, for the Belfast/Good Friday Agreement and for the peace process. Finally, debates touched on the longer-term consequences of Brexit for the UK as a whole.

Societal actors and citizens in Northern Ireland have become more attuned to the EU and to the consequences of the EU referendum vote for many aspects of their lives. This is found most emphatically among citizens around the border area (Hayward) but concerns about Brexit have also been expressed by political parties and civil society in Northern Ireland. For nationalists, the EU issue poses clear challenges to their interests and aspirations, and there has also been a reluctance to discuss Brexit for the very fact that it exposes polarized views (Arnold).

Societal actors have expended more time, resources and energy on contesting certain preferences. Political parties have produced manifesto promises and policy documents. Interest groups have published analyses of the impact of Brexit for their sectors (Lagana). Greater academic interest has been substantially evident. The Irish government has been particularly active in seeking to influence the EU and the UK (Flynn).

There is clear evidence too of diverging opinions on Brexit in Northern Ireland. This was evident during the EU referendum campaign but became more emphatic following the result. The preferences of nationalists and unionists are different. Their interpretation of what UK withdrawal from the EU means differ, as do their formulations about Northern Ireland’s status outside the EU. The interplay between domestic issues including the RHI scandal, the Irish language act and marriage equality also polarized parties and voters during this period (Murphy). 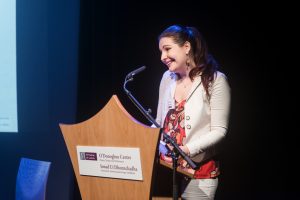 The media has certainly taken a greater interest, academics have found a new niche, and some dedicated civil society groups have emerged. NI’s political institutions have been relatively quiet; and not all interest groups have taken a position on Brexit. The extent to which there has been a broad mobilization of citizens is unclear, and it’s also unclear as to how much more attentive societal actors have become (Lagana).

Taken together, what can be empirically observed since Brexit is:

This has manifested itself in a unionist-nationalist cleavage resulting in heightened political tensions, which in turn have fueled hostility between the two political blocs and produced a polarizing effect. Most societies can contain and manage this type of contestation. In Northern Ireland however, that is not necessarily a given … (Murphy)

Disaffected and disadvantaged communities in Northern Ireland are also vulnerable at this time. Nationalists/republicans, who share the characteristics of the ‘left behind by globalisation’ cohort associated with the Brexit vote, may become more receptive to the united Ireland rhetoric which locates their economic and political best interests in a united Ireland. There are already signs that support for Irish unity among nationalists is growing. The political identity of unionism tends towards being ‘against’ nationalists and so it does not have a secure ideological, political or cultural basis. Numerically the size of the unionist community is also in decline. These factors feed into unionist ethno-political insecurities and create a community, which is perpetually defensive and distrustful. In the context of Brexit, those insecurities are bolstered by nationalist support for Remain (which clashes with unionist support for Leave) and by the marginalisation effects of the UK withdrawal from the EU. Such developments breed resentment and may see unionists/loyalists adopt hardened political positions which hark back to the dark days of the Troubles. In all this, communal polarisation is heightened (Arnold).

The resulting chasm has intensified the division between the parties, and led to shifts in their focus:

The two dynamics have contributed to an increasingly toxic political environment, which is not helped by the already strained relations between the DUP and Sinn Fein, and the absence of a democratic forum i.e. the Northern Ireland Assembly and Executive, wherein such issues might be discussed and mediated (Pollak).

The 1998 Agreement was built on the back of an extraordinary commitment by not just the Northern Ireland political parties, but also the British and Irish governments which maintained a long, watchful and supporting eye over Northern Ireland affairs (Lagana). This became particularly emphatic from the late 1980s onwards as the prospects for peace became possible. The commitment to a joint approach to all things Northern Ireland was challenged by the EU referendum. The very decision by the British government to call a referendum without sufficient acknowledgement of its impact in Northern Ireland started a series of interruptions to the previously solid British-Irish partnership. Divergence and tension have been a feature of the relationship since June 2016 (Flynn). This was arguably most evident following the 2017 UK general election result when Prime Minister Theresa May agreed a Confidence and Supply Agreement between the Conservative Party and the DUP (Pollak). The convention that the British government is a neutral arbiter on Northern Ireland is now questionable and is fueling contestation and hostility. The equality afforded to both communities, as guaranteed by the 1998 Agreement, is challenged by this arrangement and there are legitimate questions about the extent to which the key principle of parity of esteem is accommodated by this recent quirk of electoral arithmetic. Brexit undermines the very basis of the 1998 Agreement, which was built on the solid foundations of British-Irish consensus and cooperation, and buttressed by respect for equality (Logue).

The future of North-South and East-West cooperation is challenged by Brexit, which limits the capacity for the institutions of the Agreement to operate effectively. This produces a distance between the two states and undermines the central tenets of the Agreement’s unique institutional architecture (Pollak).

In summary, Brexit has revealed a swathe of divisive and transformational forces with the potential to alter Northern Ireland’s constitutional architecture. Given that the 1998 Agreement followed a 25 year period of violent conflict, and its terms were only agreed after a complex, tense and difficult negotiation period, it is highly disconcerting and troubling that Brexit threatens key features of a hard won peace. Protecting the Agreement, however, is vital to Northern Ireland’s future – there is no ready or easy alternative (Murphy).

Given the 20th anniversary of the Agreement, it is worth noting that the document provides something of a template for facing down current challenges. At this critical juncture, summoning the spirit and attributes of the 1998 negotiation period – cooperation, consensus, compromise, creativity and courage – provides some basis for addressing Brexit. Should the local political parties produce agreement on what fits Northern Ireland’s best interests, and then collectively contribute to shaping a UK exit from the EU, which recognises those preferences, it may be possible to stabilize the worst Brexit consequences. This is an admittedly challenging and complex prospect, but Northern Ireland’s fragile peace process, and the future of the Agreement may depend on it (Lagana).