What might Brexit mean for the rest of Europe? That was the heart of a conference hosted by ESPOL – the European School of Political and Social Sciences – in the Catholic University of Lille on 9-10 November 2017.

The conference – convened by Julien Navarro of ESPOL and Michael Holmes of Liverpool Hope – drew in contributors from twelve different countries, and explored post-Brexit politics from a number of points of view. 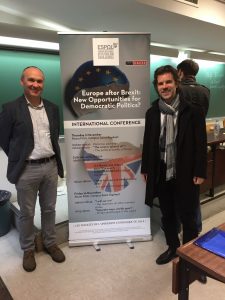 Two panels looked at the political impact of membership, one from the perspective of the EU, one from that of various member states. There were also two panels looking at policy consequences, one focusing on internal EU policies such as the CAP and asylum policy, the other concentrating on the foreign and security policy dimensions.

The conference was also treated to two keynote addresses. First, Christian de Boissieu, co-chair of the Franco-British Council and a visiting professor at ESPOL, discussed how Franco-British relations might be altered by Brexit. Second, Gilles Pargneaux, French Socialist Party MEP for the North-West constituency, explored how Brexit might actually create opportunities for the European Union. And at the end of the two-day event, our contributors still had enough energy to provide short interviews for ESPOL students on a media and politics programme!

The conference was very generously supported by UACES through a Small Event Grant, and we are delighted to note that the event has now led to several follow-up panels at the UACES annual conference this year. So if you missed out on the conference the first time round, you can still catch up – see you in in Bath in September!

Watch video interviews with the conference participants on Youtube: