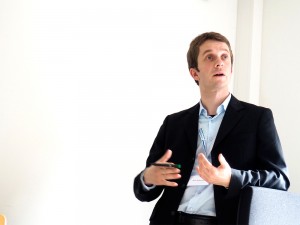 The idea for this workshop was quite simple: to bring together new and established EU studies researchers that use qualitative methods to investigate the role and functioning of EU institutions. The Council of the European Union, for example, is a key player in European decision-making and still one of the most puzzling institutions for EU research.

Over the last few years, a number of pertinent quantitative and qualitative studies have addressed key questions, such as: voting patterns and coalitions in different policy areas, socialization effects in the Council, the influence of external actors such as interest groups, the role of informality, etc.

Although, qualitative research is out there, the network is not really established, which makes it difficult, especially for young researchers, to connect. Quantitative methods, however, have long dominated the field of EU research. It appeared particularly desirable to discuss questions regarding possible contributions to fill the gaps left by quantitative research.

The workshop was specifically open to researchers from different disciplines and theoretical or methodological backgrounds, in order to encourage interdisciplinary debate. Indeed, we tried to account for both theory and methods, but the focus was slightly more on methods and empirics than on theory.

The great variety of presentations, both in terms of content and methodology, was very well received by the participants and guest speakers. A roundtable, specifically organised to bring in actual EU experts, proved to be highly valuable, both in terms of input from policy-makers, as well as further discussion of empirical work.

We are planning to build on this workshop by organizing panels for the 2016 UACES Annual Conference and we aim to use the most recent projects of the participants as a basis for a special issue publication.

This event took place at the University of Bamberg on 13 November 2015 and received support from a UACES Small event grant.