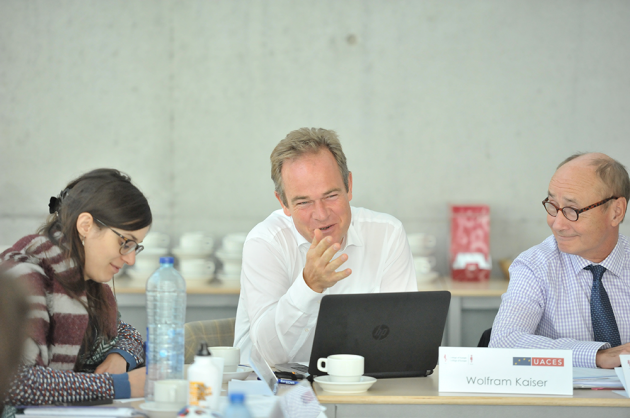 The College of Europe organised a workshop with the financial support of a small events grant from UACES. The workshop focused on the increasing interest on narratives among European studies scholars and the institutions of the EU. In recent years there has been a tendency to explain the successes or mainly the failures in building and justifying policy or polity-building proposals for the EU in terms of the difficulty of articulating narratives appealing to the contemporary European public. The contributors, however, highlighted that the notion of narrative is often not made explicit in most of these debates and that it is far from clear how the success or failure of a narrative can be addressed.

The workshop had three main dimensions. Firstly, it considered how narratives have become prominent in academic interest and political practice in the recent years. Narratives are associated with projects of political identity construction. The current debate on which, the narratives underpinning the process of EU integration, therefore, suggests that the EU is undergoing a significant change in its relation to citizens.

Secondly, the authors considered how the EU institutions have embarked in explicit or implicit attempts to build narratives of European political and cultural union. This has been achieved through debates on the state of the Union, cultural committees seeking to give the European project a cultural or artistic “soul” or designing euro banknotes. Most of the authors concluded, however, that these projects have rather shown the tensions of references to culture or to a political project seeking to reinforce European identity. This is instead of succeeding in showing a clear prospect for a change of narrative in the future.

Finally, the workshop analysed societal narratives of Europeanness in relation to history, memory or cultural diversity. The underpinning question is whether there has ever been something like a shared hegemonic narrative of European integration shared across the continent – and how it has been translated into historiographic and memorialisation practices – and whether this can be (re)created, in the wake of mounting Euroscepticism and contestation of the EU.

This event took place at the College of Europe, Bruges, on 13 October 2015 and received support from a UACES Small event grant.