The idea to promote familiarity, mutual trust, a collective European identity and support for European integration by giving citizens the possibility to interact across borders is at the heart of a wide array of EU policies, such as the Erasmus student exchange or town twinning projects. This idea goes back to Karl W. Deutsch’s transactionalist theory that suggested creating ‘security communities’ that set the framework for increased cross-border transactions among their publics. Proliferating transactions were expected to induce learning processes, which in turn would lead individuals to lower their out-group boundaries, appreciate the newly established polity and eventually adopt a collective identity

Amid increased transnational interactions and networks in the European Union today, one may thus expect that European citizens support European integration. However, while transnational networks and activities have indeed proliferated over recent decades, they have not been accompanied by an increase in political support for European integration. Quite to the contrary: Since the signing of the Treaty of the European Union in 1992, an eurosceptic public has challenged Deutsch’s optimistic assertions. This documented in figure 1: whereas transnational contacts and information flows, taken from the KOF index of globalization, have increased tremendously over the past decades, net EU membership support has not. In short, whereas Europeans lead increasingly transnational lives, they have not become more European-minded. This raises the question: To what extent are cross-border interactions among ordinary people really helpful in fostering a feeling of European identity and EU support? 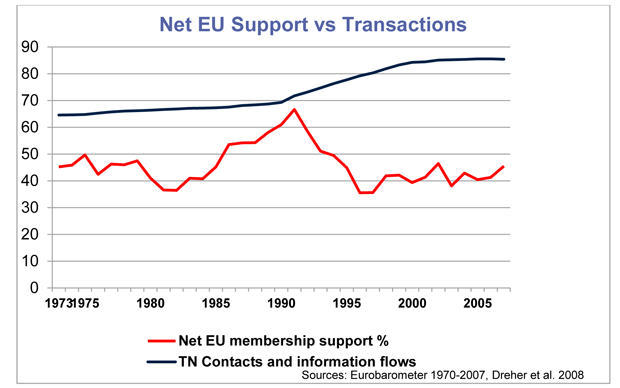 My central argument is that there is a significant relationship between individual transnationalism and EU support at the individual level, but that transactions are socially stratified, (2) they can create a backlash against European integration among Europeans who are not transnationally active themselves, (3) and their effectiveness is dependent on their purpose and scope.

The social stratification of cross-border practices

First, social structures filter who takes part in cross-border interactions. Analyses of Eurobarometer survey data in all member states in 2006 and 2007 show that only a highly skilled, wealthy, and young minority regularly interact across borders. Thus, the transactionalist hypothesis is relevant only with respect to a small, avant-garde section of the public, while most Europeans are not prompted by transnational interactions to develop support for European integration. Consequently, it is not sufficient to model EU support as a function of the aggregate level of transnational interactions as this conceals the unequal distribution of transactions across society. Rather, one ought to study the effect of transactions at the individual level.

It is therefore crucial to consider the effect of transactions on people who do not interact across borders themselves. These people are likely to feel overwhelmed by the influx of new ideas, people, and products into formerly rather homogenous national societies, and by the ensuing social and economic tensions. Moreover, they might feel excluded from the transnationalization of their realm. Rather than observing more widespread and uniform EU support, we witness a divide between winners of transnationalization who favour further integration, and its losers who opt for the closing of national borders. In fact, my analyses show that people who don’t interact across borders but live in highly transnationalized societies, such as Austria or the Netherlands, are even more sceptical towards European integration than people with similar lifestyles in less transnational societies, such as Malta or Slovenia.

The effectiveness of transactions in promoting EU support depends on a number of factors, such as their purpose and scope. These aspects influence how Europeans experience and frame their interactions, and consequently, whether they link it

For policy makers who aim at fostering European identity, this has a couple of important implications. First, considering the social stratification of cross-border transactions, it is advisable to promote cross-border transactions of the overall population. Current policies, such as the Erasmus exchange programme, mainly target highly educated Europeans – who already,  tend to travel and move across Europe, and to support European integration, to a very high degree. Rather than on this Europeanized group of people, it is most effective to encourage transnational interactions among low educated people. Second, given that purely instrumental interactions are less effective in promoting EU support than sociable interactions, policy makers are well advised to promote the latter, or to emphasize the sociable aspects of instrumental interactions. As Jacques Delors famously put it, ‘you don’t fall in love with a Common Market, you need something else’.

This article arose from Theresa’s presentation at a UACES Arena seminar which took place in Brussels on 8 October 2013. There were 47 attendees at the event and the audience included representatives from EU Institutions, think tanks and pressure groups.