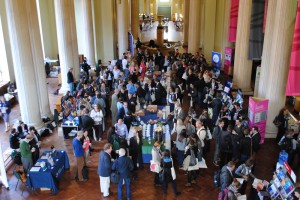 The expectations I had of sampling work on EU studies of strong interdisciplinary pedigree was satisfied in the first morning of the UACES 2013 conference. After a lively opening plenary on euroscepticism I went to a session with presentations on inter-institutional dynamics in the EU by Michelle Cini, with a particular focus on inter-institutional deals, a discursive institutionalist approach to EU nuclear power policy by Pamela Barnes and Andrew Glencross’s survey on ‘political constitutionalism’ as a response to the EU’s legal and democracy problems. Cini’s presentation provided ample and eye-opening empirical detail to the formal and informal relationships that exist between EU institutions in an attempt to craft a potential new research agenda.  The historical-legal questions of the latter two presentations also presented plenty theoretical food for thought. Barnes in particular offered interesting points of reference to my own research and the relationships between the uses of different branches of institutionalism within a particular EU policy context. Fundamentally this returned to a recurrent theme within EU studies as to how institutionalist theory encompasses different discursive, historical and agency approaches to European integration.

Glenross’s presentation tied in with a session I attended in the afternoon on the relationship between the European Court of Human Rights and EU law. Although Glenross spoke of the need for further political not just further legal constitutionalisation to correct the EU’s democratic deficit, this did speak directly to a research agenda involving legal and political approaches to emerging problems in EU law concerning social rights. As discussed by Rebecca Zahn in the afternoon session I attended, the relationship between the European Court of Justice and the Court of Fundamental Rights will be the subject of important research in how EU legal and political norms concerning social rights are policed.

Interdisciplinary interests centring on the interaction of politics and law at the European level were perhaps the big highlight of the day, and demonstrated the strengths of EU studies in bringing together different disciplines in a manner not done quite as well within other disciplines.

The evening plenary, which featured a speech by Lord Wallace of Saltaire, was not as heated as the morning session on euroscepticism, but still provided excellent additions to the discussion earlier in the day that partly focused on Britain’s place within European integration. Hopefully the second day will be as thought provoking as the first!